The start of these blog posts are starting to sound like the emails I send to friends back in Australia…’I know it has been long since my last email but things have been crazy busy’ Now that is out of the way let me set out some pics and details of what we have been up to.

The most exciting news of late is that we are now part of the Eat.st collective of street food traders. With them have started trading on Monday at King’s Cross. Feedback has been excellent and in the two weeks we have traded there we have picked up a whole lot of new Indian Street Food converts.

Here is a pic of our set up at King’s Cross: 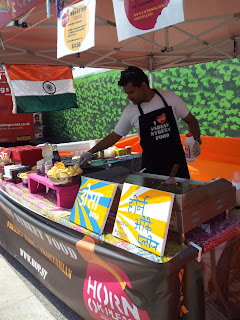 Early summer nights have also seen us at two night markets…StockMKT in Bermondsey and StreetFeastLDN in Brick Lane. This is a 12 week event and we will be there for 5 more weeks after the Jubilee Weekend.

Two weeknds in April saw us pitch up at Southbank behind the Royal Festival Hall for the ‘Taste of India’ Festival in conjunction with events happening at the Festival Hall.  This was organised by the people behind the RealFoodFest. It was nice to stand out from the crowd of traders who were presenting the usual curry, rice and naan. Moong Dhal dosa and Samosa Chaat were a hit and toward the end of each day it was all about pani puri and bhel puri – was like being back on the streets of India. As a first the organisers also asked if we can do a demo on street food…my first but I think it went well.

Video of the first weekend.

At Taste of India we met some great people. One of which lead to our first canapé event held in May for an art exhibition ‘Hope Amongst the Ruins’ showcasing stills from movie by Deepak Verma (of EastEnders fame) called Mumbai Charlie. The money raised was going to charity so HOP was happy to help out. Mini Bhel Puri, Aloo tikki, and pani puris were all served to a very receptive crowd. We look forward to working with Deepak on future events.

We have also been at Brick Lane on our weekends off and where possible at Surrey Street in Croydon.

‘Getting back on to Brick Lane itself, at No 152 you’ll find the Boiler House Food Hall. You’ll be spoilt for choice here, but don’t miss the bhel puri (spicy, fruity puffed rice with pomegranate seeds) from Indian street food specialist Horn OK Please.’ Thank you Matthew Lee

We have also been working with Walk.Eat.Talk.Eat as one of the stops on their food tours through East London – most memorable was feeding 13 people on a ‘dating tour’. Charli is also working on a  ‘guidebook that guides people to wonderful and weird food and drink places in East London. But you get to build your own food tour. So you get what you like, when you like, how you like, where you like.’ Finishing the book requires funding though so please support on http://www.pleasefund.us/projects/create-your-own-food-adventure

After that run down of what has been happening here is what we have coming up in terms of festivals and markets:

Make sure you don’t miss out on visiting our stall and sampling what everyone is talking about.